How to ‘Transform’ multiple resources with Regex in K10

The ability to move an application across clusters is an extremely powerful feature that enables a variety of use cases including Disaster Recovery (DR), Test/Dev with realistic data sets, and performance testing in isolated environments.

Transforms are loosely modeled on JSON patch and support regex to modify resources with a pattern.

Our K10 documentation provides a simple example of Transformation. This article provides an example to showcase the use of regex along with transforms for modifying ingress/route hostnames.

Transforming the routes/ingresses hostnames during restores

Here is an example of such a scenario.

Assumption There are 4 ingresses with the hostnames as shown below

While restoring these ingresses to another cluster, there is a requirement to change the `prd-*`,`cn-*` from the ingress hostnames to `dr-*`. The restored ingresses/routes are expected to have the below hostnames.

Multiple transformation operations can be used to achieve this, which isn’t efficient! K10 has inbuilt support for matching patterns using regex for transformation.

Following regex expression and the JSONpath expression can be used to achieve the desired transformation outcome.

The above expression matches pattern as shown in the image below

(Note: https://regex101.com/ can be used to test and try out regular expressions) 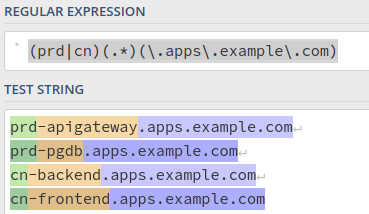 Adding Transforms operation from the UI using the above values

While performing restore or creating an import policy with restore, in UI, Apply transforms to restored resources under Optional Restore Settings can be used to apply the above values. 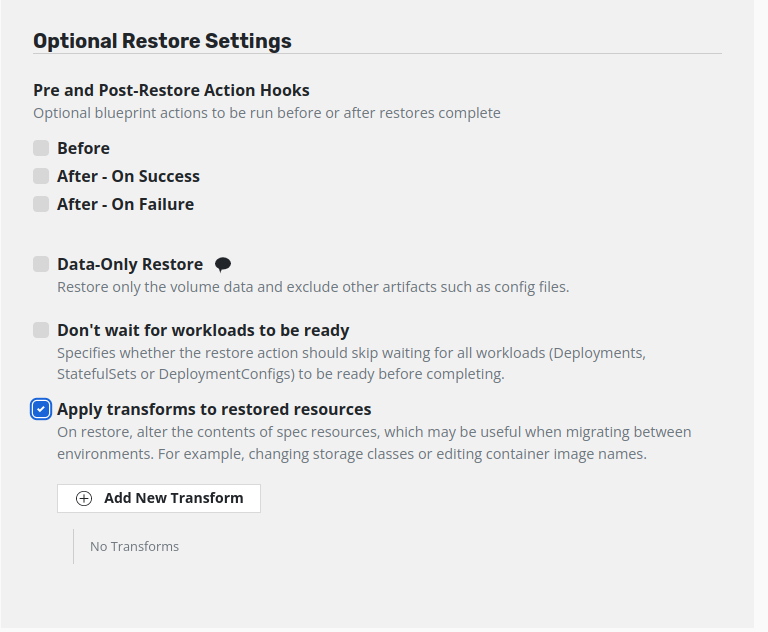 In the ‘New Transform’ form, fill in the name for the transformation resource in consideration and add an operation intended with the transform.

Operations that are supported include Test, Add, Remove, Copy, Move, Replace without and with Regex pattern matching.

In this example Replace with Regex(Replace element at path with JSON value. Match the target text with regex and substitute regex capturing groups with value) was selected 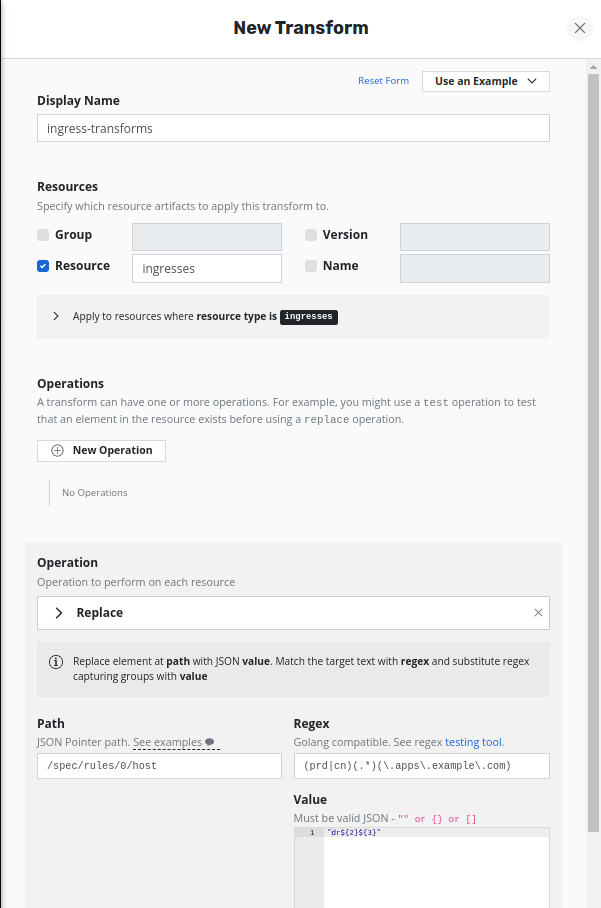 This operation can be tested from the UI by comparing the original and transformed resource.

Transform operation can also be accomplished by editing the Policy CR using ‘kubectl edit’ to add transform field, shown below, under restoreParameters while creating an import+restore policy.

Trigger the import policy and verify the ingress hostnames after the restore.